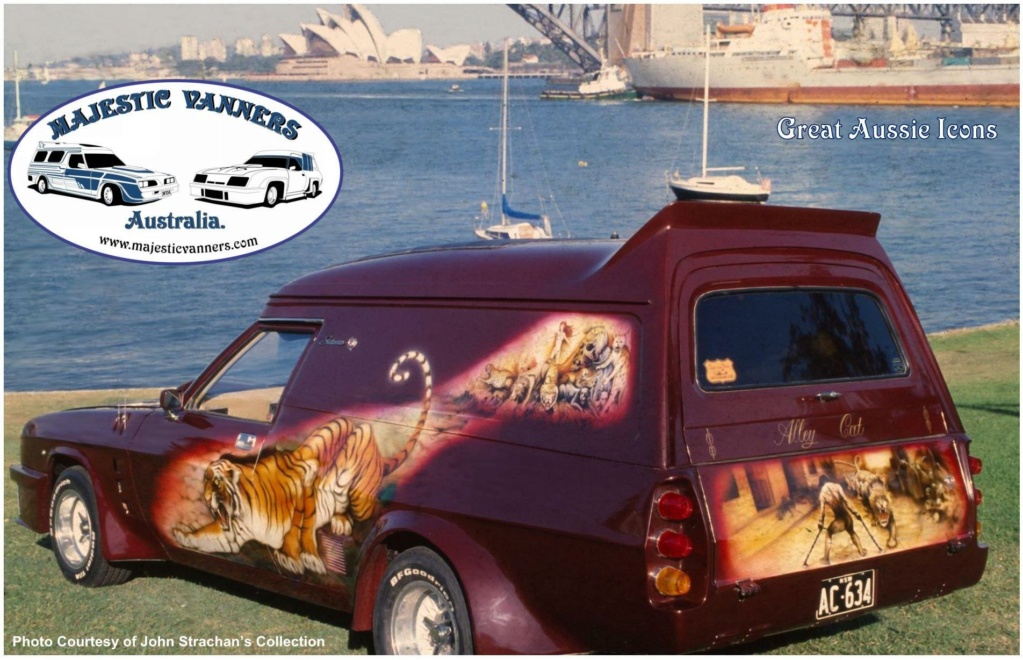 MAJESTIC VANNERS AUSTRALIA INC. :: UTES AND ONE TONNERS :: Utes and One Tonners

Thought I would post up some pics of one of my other projects.

Bought this a fair while ago while scouting for parts for my xp coupe. While the van has been at my mates shed getting things done to it that im not confident in doing I have been playing around with this a bit

Plans are to have it original looking just as god intended it. 4 link the rear and bagged all round. I love the patina and the look of it at the moment. Sure it has a some rust bubbles here n there, the tailgate isnt real nice but hey its 50 this yr and im sure if I still look this cool at 50 ill be cheering

Anyway heres some pics of when I first found it. looked terrible at the time but I could see the potential in it

surprisingly enough the body was rust free. just a couple small bubbles on the rear 1/4 and the floor pans which need replacing.

so i put a diff under it and dragged it home.

ripped the engine out as it was seized and I plan on putting the 250 from my xy van into it.
I also put a grille, front bar and lights and a visor that I had lying around on it and some NOS taillights and rings that I had from another car on it too. It finally started looking like it should again

I have a mate who is a trimmer so one weekend we ripped this xf bench seat I had in another car out, removed the headrests and he trimmed it up for me

and thats how she currently sits now

I am now collecting parts to finish it off. Got myself a really good pair of front guards for it and they are the same colour too which was a score

and have bought a 4link, bags and everything needed to bag it all round (except for front bags atm, should get them soon)

the original "my family" drawing

the 4 stud to 5 stud converted wheels

or the race signage up the side

That's cool dude but how sweet is that pink cosy coupe!!!!

I moved this to the ute catagory for you dude, the patina look is taking off and this thing will make an awesome cruiser! With so many projects club rego could be a blessing to enable you to enjoy them all..........

The Zodiac wrote:That's cool dude but how sweet is that pink cosy coupe!!!!

haha you have a good eye my friend. that is only 1 of Rubis many cars she has haha.

This is her favourite though. A custom Phantom Purple painted jeep haha

when we first got it given to us it was a bit worse for wear. But she loved it. Like her dad she wanted something flash though haha

so she helped me rip it down and paint it

The Zodiac wrote:I moved this to the ute catagory for you dude, the patina look is taking off and this thing will make an awesome cruiser! With so many projects club rego could be a blessing to enable you to enjoy them all..........

sweet thanks. yeh it is becoming pretty popular isnt it. should look very cool when its all done. Low and Slow haha. Club rego will be a blessing for me haha. This thing is really only getting built to take to rod runs etc so would be soooo good.

Should make a cool cruiser mate, I should get a pic of the similar one I see at work all the time for you.

Looks like someone was planning to make a sedan delivery out of it the way that wagon roof was sitting on it in that first pic! That would be cool!

The pic of the 4 to 5 stud pattern conversion is a bit scary!

I'm looking forward to watching this one progress as well.

Rubi's Ride is totally Pimped and Awesome. Great to see she is taking after her Old Man.

There's a lot of GMILF out there.

Get some pics mate that would be cool. I would love to see it.

I have thought about cuttin that other roof up n using it as a cool sort of hard cover for it haha. Maybe one day

And Yeh rusty you certainly do see the odd cougar around these days haha.

Hoping to get a bit more work done over the wkend so will keep you all updated.

bit more of an update over the weekend

got the new guards put on to replace the old rusty dinted ones.

Passenger one is awesome. so happy with it

I hadnt taken the drivers guard off yet so was a little worried about what was behind there and the front of the sill.

But it was awesome. no rust, hardly even any surface rust, Just red dirt haha. So I cleaned it up and POR15 is all before putting the drivers guard on.

drivers one is alot straighter then the old one too. It does have an old repair in almost the same spot as the old one but it is a much better guard. Looks worse because of the moss but its awesome

I also pulled the hoodlining out. It was half torn and because the ute was sitting in a paddock with no passenger door for so long it was full of grass up in the roof.
So we ripped it out and gave the whole roof a clean up. For now this will be how it stays

until summer when it starts to heat up haha

and I whacked some black stocks and whitewalls on it

While I had the wheels off I just had to try one of my billets on it haha. Looked fat, But didnt fit at all. Had no chance of turning the wheels with it this low haha

I think I like this look better anyway. What more could you want out of a pig.
Patina, Moss, Slammed and Whitewall tyres

and that was my wkend work. Its starting to look pretty darned cool now I think

Really love this old thing. No offence but if it was mine I would turf that new seat and stick an original bench back in it. Even if its stuffed I would just sew a couple of old hessian bags to the springs just to keep that old rat theme intact. To me it is stuck between two themes with that new seat in it.
Like I said though no offence intended as its your car. 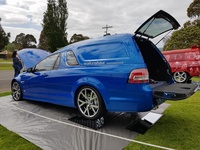 No offense taken mate I completely agree with you. To start with I had planned on painting the ute but the more I looked at it the more I love the ratty look of it. I'm going to be keeping the seat just so it's comfy and nice to drive in but will be chucking a Mexican blanket over it

Fair call mate. Either way its a cool ole bus. Will be turning some heads when you eventually bust it out and cruise

that is the sweetest ride i think iv almost ever seen ,after seeing this im goona buy one of these bad boys and do somewhat the same thing

anyway how low is that? from stock or from the ground ;D get back to me aye

thanks mate. it is a pretty cool thing. the old xk and xl utes are getting fairly thin on the ground these days so its good to have this old girl still looking original haha.

the rear is mono leafed at the moment just to see how low it will go with the bags and 4link in without notching the chassis. Im happy enough with it going that low haha.

The front is the same deal. we removed the springs to see how long it would go before hitting anything. the sills and front are still well over 100mm but I dont know how I will go getting an exhaust under the thing at that height.

I finally got some pics of the ute I was talking about. When I first saw it it had original paint with a wicked patina effect to it, some subtle pin striping and looked awesome.

It has since got new paint and looks really neat, but I liked it alot more when it had the ratty look to it!

It still has a mexican blanket chucked over the front seat... 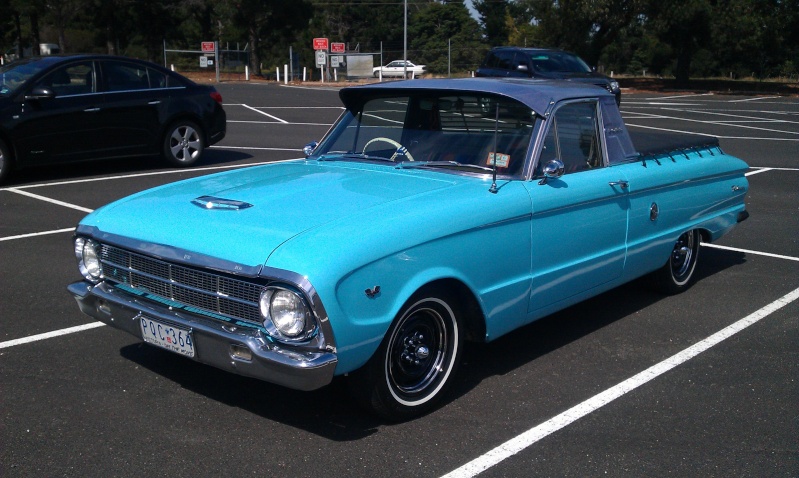 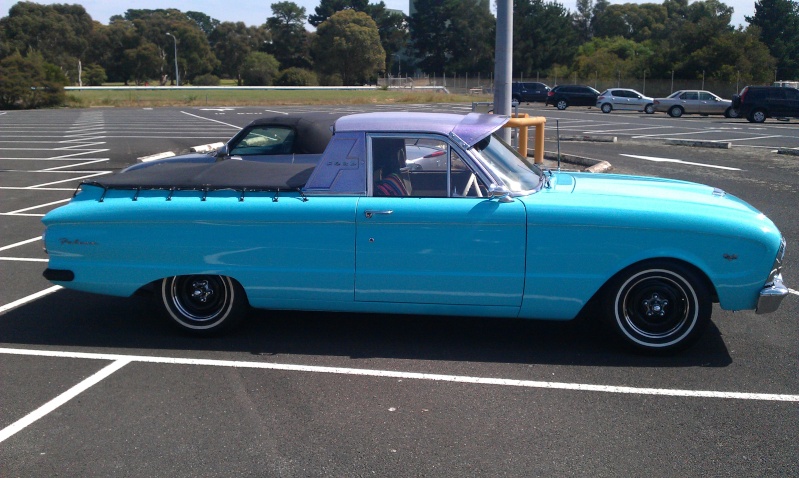 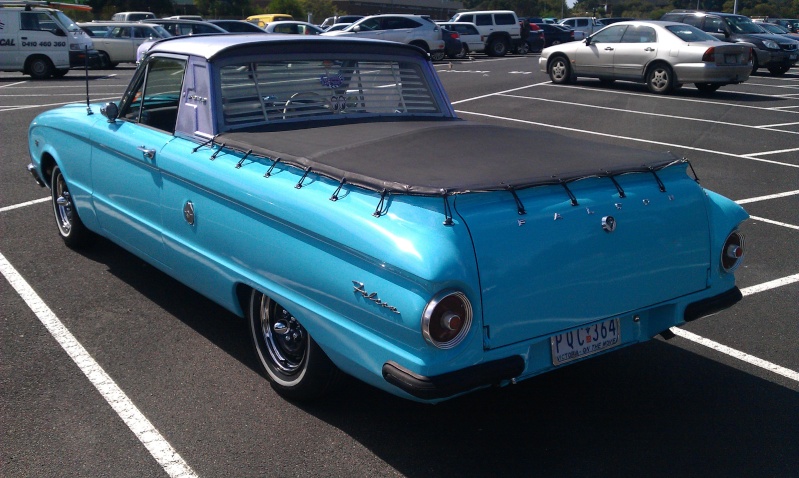 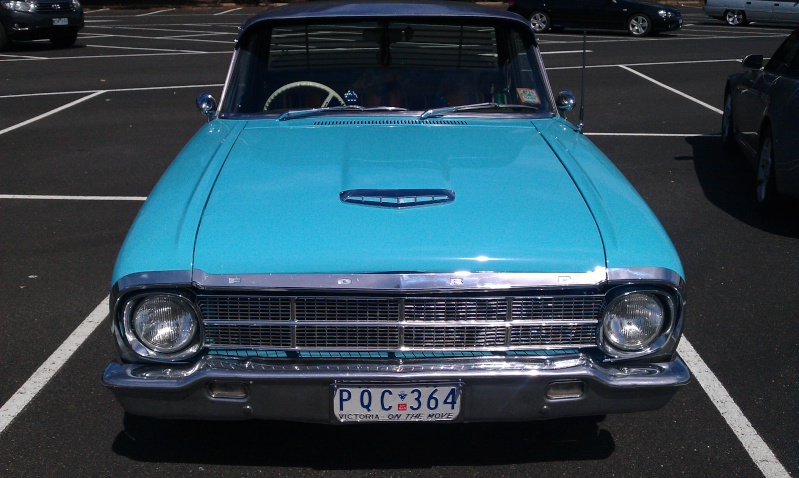 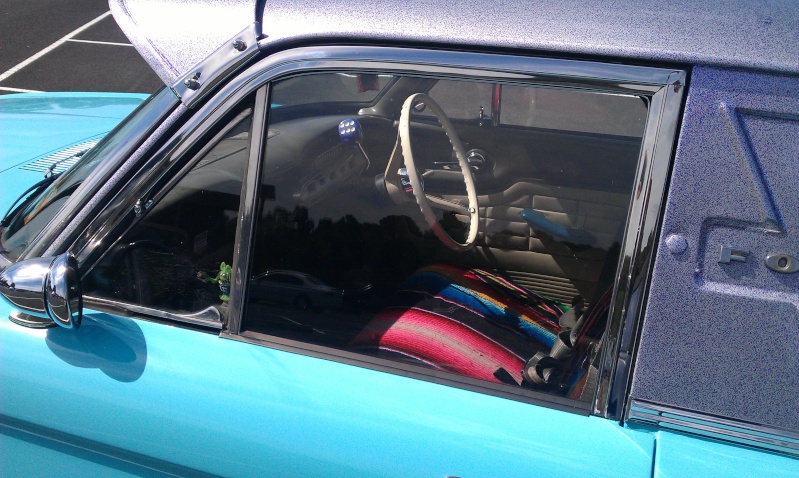 wow Karl thats awesome! thanks heaps for that

No worries mate, thought it might give some inspiration!

But like I said I preferred it with the original paint and patina. Still it is a very neat looking ute, is it a XM?

Hope you decide to finish the theme on your ute, would be good to see it complete.
(stick her on a trailer for the van-in?

Although.....I am really looking forward to your van being complete..... would be awesome to see a wild violet XY van on the road.... rare as rocking horse s@#t! Such an awesome color!

cheers mate. comments like that help to keep me motivated haha.

Yeh that ute is an xm. xms are damn rare these days too. not alot about. I am definately keeping the stock original theme with my ute. If i decide to paint it and strip it down it will be another half done project to add to the collection haha. I cant have that I just want to drive the thing already. Got the engine mounts sorted out now and will hopefully get the engine (just a 250 pre crossy) in in the next couple of weeks. Also dropped off the gear for my 4link today to have some brackets made up so should have some more progress there soon

got a bit more done to the old girl on Saturday.

so we ripped the engine out of his car

and dropped it straight into the old ute

then we pushed it outside in the open for the first time since putting the guards n wheels n stuff on it. Starting to look pretty cool I think

All you need is an XL Van to go with it.

I know Rusty mate. that would top my little collection off. I dont know if thats going to happen at the moment though. Price seems pretty firm

The more pics you post the more I won't one

MAJESTIC VANNERS AUSTRALIA INC. :: UTES AND ONE TONNERS :: Utes and One Tonners